Two local geological societies, the Leicester Literary and Philosophical Society and the Warwickshire Geological Conservation Group, visited the Geological Collections at BGS on a sunny Saturday in August. In the morning, Dr Phil Wilby showed them the work that BGS has been doing on the Ediacaran (Neoproterozoic, Precambrian) fossils of Charnwood Forest. This work centres around new sets of moulds and casts that BGS has produced, in conjunction with GeoEd and Natural England. At one locality, approximately 140m2 of casts have been made, making it probably the largest exercise of its type anywhere in the world. Studying the casts under controlled lighting in the laboratory provides much more information than can be seen at outcrop.
I then showed the societies round other parts of the Collections, including the GB/3D scanning and imaging lab. Here they donned 3D glasses and enjoyed some of the delights of the BGS type fossil collections, while I explained how laser scanning works. There was a lot of interest in the digital models and I offered to make a selection of models available for download before the official launch of the main project website next year. 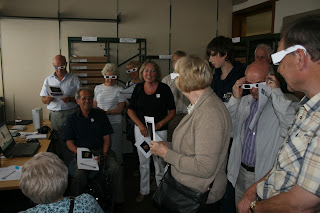 The Warwickshire and Leicester groups put their 3D glasses on to view some of the digital models.


After lunch out in the sun, the group then viewed the recently open Geological Walk http://www.bgs.ac.uk/contacts/sites/keyworth/geologicalWalk/home.html  and endeavoured to identify the many different rocks – before receiving copies of the guide. Then, after the group photograph in front of the James Hutton building, which forms part of the walk, everyone dispersed.