The GB/3D Fossil Types digitisation team recently paid a visit to the stores of Museums Sheffield
(link: http://www.museums-sheffield.org.uk/), to image the type specimens held there. One of the most interesting specimens was the holotype of Dentalium sorbii, pictured below. 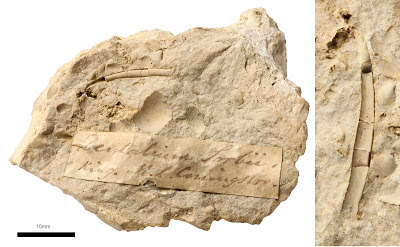 Even just the name of the fossil tells us many things:

·         Dentalium, the name of the Genus, is taken from the latin Dentis, for tooth, as the fossils are shaped like teeth, even though they are actually a kind of mollusc!

·         sorbii, the species name, is named after Henry Clifton Sorby (link: http://en.wikipedia.org/wiki/Henry_Clifton_Sorby), who presented this specimen to the museum. Sorby was born near Sheffield in 1826, and went on to become a geologist and metallurgist of some significance. He was once ridiculed for wanting to “examine mountains with microscopes”, yet his work examining rock slices ground so thin that light could pass through them led to the establishment of the field of thin-section petrography, nowadays considered a standard analytical technique. Metalurgically, he was the first person to realise the contribution made by a small amount of carbon to the properties of steel, and who has not, at some time, used a blade with the words “Sheffield Steel” engraved upon it?

·         Finally, we know that the species was described by William King in 1850 – the rules for naming new species state that it is not allowed to name a fossil after oneself. Therefore King was able to name this shell after Sorby, in his honour. Roughly translated then, the name means “Henry Sorby’s tooth shaped shell”.