Museums in the Information Age: Evolution or Extinction

On Wednesday 21st November 2012, I attended a lively debate on "Museums in the Information Age: Evolution or Extinction?", held at the Science Museum, London, as part of the Leicester Exchanges series. The event has been reported in several reviews, including a detailed analysis by Liz Lightfoot. 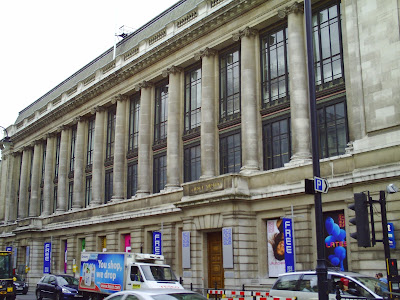 The discussion was wide ranging and stimulating. Much of it related to the ability of digitisation to improve access, and whether increased page views were linked to increased or decreased footfall. Ian Blatchford believed strongly in digitisation and summed it up as “It breaks up the cosy club. Something still lurks in the museum world which I call the grand connoisseurial view. There was a time when only a select number of people knew where to find the archives and so they had access to material for their PhDs. Now ordinary people can access amazing archives and that is just as important as what actually happens in museums."

Despite the wide ranging nature of the discussion, I felt it largely missed the important opportunity that digitisation provides - namely the opportunity to allow the (digital) objects we care for to be reused in all manner of ways far beyond our own imaginations. Just because we curate and care for the objects, it doesn't give us the exclusive right to their interpretation.

The real future is in web services - communication between  electronic devices over the world wide web. The British Geological Survey already uses Web Services to make a variety of map, dictionary and lexicon type data freely available. A number of museums are starting to provide similar access to their collections, frequently using APIs (Application Programming Interface). Key examples include the V&A, London; the Brooklyn Museum, New York and the Powerhouse Museum, Sydney. Web services will provide anyone anywhere with the means to devise their own exhibitions using selected items from the world's major collections. What better way is there of demonstrating to our funders that our collections really have an impact?
Posted by Mike Howe at 06:50