The Competition at Dinosaur Isle

One of the museums participating in the 3D printed fossil competition is Dinosaur Isle.

At Dinosaur Isle there is a slightly different competition running, to try and spot which is the real claw of the dinosaur Neovenator, and which is the claw that has been made by the British Geological Survey using a 3D printer. They have taken what was originally a white plastic cast, and painted it to match the colours of the real fossil.

The real fossil and the cast have been put together and marked A and B and all you have to do is recognise which is which. 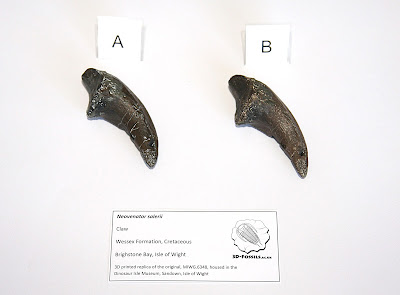 In the first week of the competition Dinosaur Isle has had over two hundred entries to the competition, and on the 12th September 5 winners will be drawn from those who got the right answer. Up for grabs for each winner is a family ticket to oin onto one of the museums fossil walks, and also to be entered into the national draw.

You don’t have to visit the museum to enter the competition, ust visit the website http://www.dinosaurisle.com and have a go.